FDA Flexes Muscle at DMAA – But Should We Even Care? 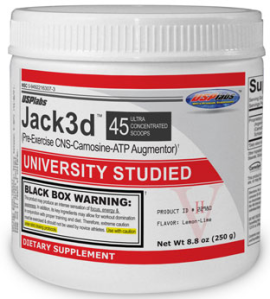 Times may be tough, but people still want to get JACKED! That is, not unless the FDA (Food and Drug Administration) has something to say about it. Over the past couple of months things have really heated up over the use of 1,3-dimethylamylamine (commonly known as DMAA) in pre-workout supplements, most notably Jack3d and OxyElite Pro from USPLabs  – the poster boys, if you will, of the DMAA movement. This past April the FDA issued warning letters to ten manufacturers and distributors (USPLabs included) of dietary supplements that contain the “adulterated” ingredient because these companies have not submitted the required evidence to support the safety of their products. To quote Daniel Fabricant, the Director of FDA’s Dietary Supplement Program;

“Before marketing products containing DMAA, manufacturers and distributors have a responsibility under the law to provide evidence of the safety of their products. They haven’t done that and that makes the products adulterated.”

The law that Fabricant speaks of is the Dietary Supplement Health and Education Act of 1994 (DSHEA) which essentially states that, in order for DMAA to be legally sold as a dietary supplement, it must meet one of two requirements; DMAA must either be 1) a naturally occurring substance or 2) have documented history of use prior to 1994. Unfortunately, the evidence to support DMAA as meeting either of these requirements is undeniably scarce. In fact, the entire legitimacy of using DMAA as a dietary supplement hinges on a single study from a Chinese journal that does not exist anymore [1] and whose contents have currently come into question. Because I cannot access this journal article I cannot (and will not) comment on the legitimacy of the issue. Whether or not it’s legal will be left up to the courts to decide.  Rather, I will have to do the next best thing and look at some studies that directly analyze the efficacy and safety of DMAA (as Jack3d and OxyElite Pro) as a dietary supplement.

Unfortunately, all the studies that look at DMAA are from a single group of researchers down at the University of Memphis, TN, whose studies were funded by USPLabs and whose articles (4 out of 5) were published in a second rate journal (1 edition), the reputation of which is tenuous at best. That being said, let’s see if these studies lend any insight whatsoever into to whether or not DMAA is even safe and, more importantly, if Jack3d is even worth spending money on.

DMAA and its Effects on Blood Pressure

In one of the first studies looking at DMAA, researchers had 10 healthy, exercise-trained subjects (5 men, 5 women) ingest either 250 mg caffeine alone, 50mg DMAA alone, 75mg DMAA alone, 250mg caffeine + 50mg DMAA, or 250mg + 75mg DMAA on five different test days [2]. The addition of caffeine is due to the fact that DMAA is usually taken in conjunction with it (like in Jack3d and OxyElite Pro). In the paper there was no specification of a wash-out period between dosages, although the study was considered a randomized, double-blind, cross-over study. Like I said, tenuous.

Subjects ingested the capsules on an empty stomach in the morning following a 10-hour fast – not a likely scenario for most gym-goers, save maybe the few but growing number of intermittent fasters out there. After ingestion, heart rate (HR) and blood pressure (BP) – both systolic (SBP) and diastolic (DBP) – were measured every half hour for two hours, among other parameters that I will not discuss.

After the two hour study period, HR was not seen to be significantly altered by the ingestion of any of the capsules. In fact, HR actually slightly decreased in all protocols, but not enough that it couldn’t have been from procedural error. What was significant was the rise in SBP after the ingestion of 250mg caffeine + 50mg DMAA and 250mg caffeine + 75mg DMAA. SBP rose from ~119mm Hg in both conditions to about 132mm Hg and 141mm Hg, respectively (see table below).

However, one of the most interesting results of the study is that the effects of DMAA seem to be 1) dose-dependent and 2) exacerbated by caffeine. Therefore, taking greater quantities of both substances, especially in conjunction with one another, will potentially result in even higher levels of BP. The most common consequences of increased BP include stroke and congestive heart failure along with accelerated atherosclerosis, renal artery disease, and a whole laundry list of other comorbidities which can, and often do, result in death.

Conversely, DBP remained within normal ranges despite increasing by about 10mm Hg over the two hour study period. Nevertheless, overall BP was increased to levels deemed unacceptable by any health professional’s standards. What is most interesting is that even though SBP increased, HR did not, which means that either stroke volume or peripheral resistance was increased as a direct effect of DMAA in conjunction with caffeine. This simply means that the arterial walls of the blood vessels were constricted as a result of the supplementation – the exact opposite of what most gym-goers desire. The authors concluded that;

This is in reference to 1948 when DMAA was first introduced as an ingredient as part of a nasal inhaler for rhinitis by Eli Lilly & Co. By the 1970s, it had been removed from the market.

If you’re anything like me right now, you’re saying, “so what?” This is a single short-term study with little bearing on realistic, long-term patterns of Jack3d consumption. Moreover, this tells us nothing about the potential ergogenic effects of DMAA on resistance training. I mean, that’s the main reason it’s being sold/purchased!

In a follow-up study by the same group, researchers looked at chronic (2-week) consumption of 2 servings per day of Jack3d and OxyElite Pro on the same aforementioned parameters (HR, SBP, DBP) in healthy, exercise-trained subjects [3]. Contrary to their previous study, researchers found that neither Jack3d nor OxyElite Pro significantly increased SBP or DBP over the 2-week study period. This is good news for USPLabs. However, there are some differences in study protocols that can potentially explain the initial results seen in the first study and the null-effects seen in this one.

First off, the dosages of caffeine and DMAA contained within Jack3d and the dosage of DMAA contained within OxyElite Pro are unknown (both list DMAA as part of proprietary blend). Therefore, the levels of DMAA could have been below what was used in the previous study. Furthermore, the caffeine content in OxyElite Pro (100mg) is well below the dosage given in the previous study (250mg), again possibly explaining the differences seen between the two studies. Therefore, the unknown quantities of the compound in question (DMAA) and the lower dosage of caffeine in OxyElite Pro could potentially explain the null-effects seen on SBP and DBP.

Another difference seen between the two studies is that Jack3d contains extra ingredients, like that of arginine, a non-essential amino acid that has been shown to reduce blood pressure (SBP and DBP) [4], at least in subjects with pre-existing clinical manifestations like hypertension. Therefore, the arginine in Jack3d may have helped to counteract the hypertensive effects of DMAA. Although this may seem like a logical justification, it still doesn’t explain why OxyElite Pro had effects similar to Jack3d without the addition of arginine. This, however, could come down to the small n-size used (Jack3d = 7, OxyElite Pro = 6) and the fact that the results may be simply due to chance.

A major limitation of this follow-up study is that compliance of intake was measured via self-reporting and the collection of empty supplement bottles by the researchers at the end of week two. Because there was no strict control over intake, subjects could have potentially A) skipped some dosages (or all, aside from the two study conditions) and thrown out the rest, or B) taken even more than the recommended intake and run out of servings well before the follow-up test therefore eliminating any effects of the supplement by virtue of the “wash-out days” leading up to testing. Given these limitations, in conjunction with a small n-size, the study leaves us questioning the validity of the results.

Nevertheless, despite the various limitations, this study does lend some initial – albeit weak – credence to the argument that normal consumption patterns of either Jack3d or OxyElite Pro (which would be half of what was consumed in this study) are potentially safe when it comes to cardiovascular parameters. Obviously (many) more well-controlled studies are needed to confirm or deny these results.

But What about the Ergogenic Capacity!?!?

Unfortunately, this study tells us nothing about the ergogenic capacity of Jack3d. The researchers didn’t even try to measure it. I mean, sure, we can argue all day that it may be safe to consume, but if it doesn’t actually help with your workout then what the hell is there to argue about?! The simple answer to all of this is that there must be more well-controlled studies looking at realistic, chronic consumption of Jack3d by independent researchers with no financial ties to USPLabs. Unfortunately, these studies do not exist. To my knowledge there are only two other studies that evaluate the safety and efficacy of DMAA as a weight loss supplement [5, 6] and produce equivocal results. Moreover, both studies have limitations worthy of discounting their results altogether, aside from commercial backing; those being no control of dietary intake [5] and no actual measure of weight loss [6]. This essentially leaves us right back at square one.

So, to summarize today’s talking points:

In the end, like most other hugely-hyped supplements, Jack3d appears to be nothing but another waste of money. You can argue all day that it might be safe, but for what? There’s nothing in Jack3d that can’t be purchased separately and for much less. Until there is compelling data that shows that Jack3d is superior to the individual, well-studied constituents contained within it (creatine monohydrate, beta-alanine, and caffeine) I will gladly sit back while others blindly buy-out what’s left of the, now banned, DMAA products.

This entry was posted in Supplements. Bookmark the permalink.

6 Responses to FDA Flexes Muscle at DMAA – But Should We Even Care?