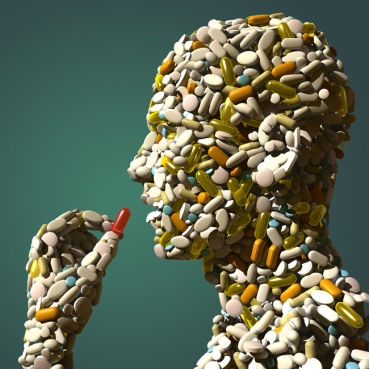 Over the past 25-plus years carnitine has received a lot of attention, both from researchers and supplement companies alike. Indeed, both camps are interested in carnitine’s role in fat metabolism; however, it is for two very different reasons. Researchers are primarily interested in the ergogenic capacity that carnitine may have to offer endurance athletes – namely carnitine’s glycogen sparing effect via increased fat oxidation – while supplement companies (and consumers) are mostly interested in carnitine for increased fat oxidation to enhance fat-loss and improve body composition. Being the skeptic that I am, today I will evaluate both sides of the aisle and make some final comments and conclusions about whether or not it’s practical to take carnitine supplements, be it for performance purposes or weight loss endeavors. As always, I will begin with some background information (with a little biochemistry thrown in there), follow it up with the pertinent research, and then end with some closing remarks and applications. Let’s get to it!

Before I actually get into the potential benefits of carnitine supplementation, I think it would be best to first cover the rationale behind taking carnitine for performance. In doing so, I will try to keep this as short as possible.

It has been well established that the body can use both carbohydrate and fat (in the form of free fatty acids) for muscular contraction [1]. However, the latter only remains true at low to moderate intensities. Indeed, as exercise intensity is increased (>75-85% VO2 max), the proportion of fat that is and can be used to fuel muscle contraction is decreased – if not completely inhibited – such that carbohydrate oxidation increases (see figure below) [2]. 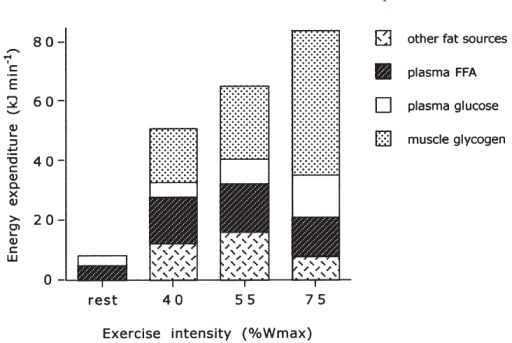 However, as moderate to intense exercise continues (as in a marathon or other endurance-type events) the reliance on FFAs is increased due to lowered glycogen stores and therefore less available glucose to fuel muscle contraction. This is important, because during the final leg of a race, runners, cyclists, etc. tend to speed up and may even sprint to the finish line. This would require additional glucose to fuel the high-intensity (>75% VO2 max) sprint. Depleting ones glycogen stores prior to the final stretch of the race could hinder the racer’s finish and (potentially) placement. It is from this paradigm that the theory of fat adaptation came about. Fat adaptation-ists believe that if one can shift their metabolism during moderate intensity exercise to exclusively rely on FFAs, then that person could potentially conserve glycogen stores for when they are needed most, like during the final stretch of a race (>75% VO2 max). Many dietary manipulations have been undertaken in order to help aid in this adaptation, however I will not cover those here as another entire article could be written on the subject. Rather, we will look at how carnitine may be able to facilitate this need (i.e. increase fat oxidation and spare glycogen) by first looking at some basic biochemistry behind fat metabolism (and thus carnitine’s role therein) that will lay the foundation for our discussion on whether or not carnitine can be used as an effective ergogenic and/or fat-loss aid.

When talking about fat metabolism, it is important to note that there are various control points at which fat metabolism (in skeletal muscle) can be regulated. A recent review by Lawrence Spriet [3] eloquently states that fat metabolism can be regulated during exercise at six different ‘control points,’ one of which is FFA transport across the mitochondrial membrane (think back to high school biology class). It is at this point that carnitine is almost exclusively involved and where I will pick up the conversation.

Carnitine – named after the Latin word carnis, meaning ‘flesh’ – is a vitamin-like, water-soluble amine that can be obtained through dietary intake (for example: meat and milk) or by endogenous synthesis via S-adenosyl-methionine (SAM) and lysine in both the liver and kidneys. Almost all (~95-98%) of the bodily stores of carnitine are present in skeletal muscle and in the heart (with the remaining 2-5% in the liver, kidneys and plasma). Carnitine plays a pivotal role in both fat metabolism as well as carbohydrate metabolism (the latter I will briefly mention when needed) [4]. Throughout most of the day (assuming you don’t sprint everywhere) the human body runs on a mixture of glucose, amino acids, and free fatty acids, with the majority of ATP coming from FFAs. However, in order to oxidize these FFAs (and yield energy in the form of ATP) each fatty acid must undergo a process called beta-oxidation. Beta-oxidation takes place within the matrix of the mitochondria of the cell. In order for the fatty acid to even make it into the matrix, it must rely on the help of carnitine to facilitate its transport in. Once inside, the fatty acids can undergo beta-oxidation and proceed to the Tricarboxylic acid (TCA) cycle and produce ATP.

It is at this point that I would like to stop and regroup. The above paragraph is extremely important because it really lays out the basis (theoretically) for carnitine improving both performance and body composition. This however, operates under a couple of assumptions: 1) that carnitine translocation is the rate limiting step in fatty acid oxidation, meaning that; 2) increasing carnitine levels will equate to greater transport of fatty acids into the matrix and greater levels of oxidation; and lastly that, 3) you can indeed increase muscle levels of carnitine in the first place. Granted that all three of these factors are true, than yes, there may be a reasonable case for carnitine supplementation. The real question here is whether or not they hold up under scientific scrutiny.

Above, we just saw that carnitine helps “ship” FFAs into the mitochondria so that they can be oxidized to produce ATP. Therefore, potentially having more carnitine may mean more FFA oxidation and therefore a “sparing effect” on muscle glycogen stores which may lead to increased performance. Indeed, muscle carnitine levels decrease as exercise intensity increases [3]. It would make sense that low muscle carnitine levels would therefore lead to a decrease in FFA usage, given that this effect does hold true under high intensities. However, and counter intuitively, the highest FFA oxidation rates actually occur when carnitine levels are well below resting levels [3]. Furthermore, when fat availability in the blood is artificially increased during exercise (at 80% VO2 max), with no concomitant increases in carnitine, the muscle does indeed oxidize more fat [5]. This suggests that carnitine isn’t the rate limiting step during fat metabolism. Therefore, theoretically increasing muscle carnitine levels may not even amount to further increases in fat oxidation given that maximal rates are already being achieved with reduced levels of muscle carnitine and that artificially high levels of FFA are easily handled in the absence of additional carnitine as it is. Lastly, and most importantly, increasing muscular levels of carnitine has been shown time and time again to be quite futile.

In 1994, Barnett and colleagues showed that 14 days of carnitine supplementation (at 4g/day) did not significantly affect muscle levels of carnitine [6]. Similarly, in the same year, Vukovich et al. investigated the effects of carnitine supplementation on muscle carnitine concentrations and glycogen content during submaximal exercise [7]. Here, subjects ingested 6g/day of carnitine and still did not show any increases in muscular levels of carnitine. And if two weeks isn’t long enough to convince you, Wächter and co. [8] gave subjects 4g of carnitine per day for three months and still saw no increase in muscle levels of carnitine. Moreover, had you even thought about hooking up your at-home IV kit and mainlining your carnitine, you’d still be wasting your time as direct infusion has been shown to be unsuccessful [9, 10]. What’s more is that performance parameters such as perceived exertion, exercise performance, VO2 max, or markers of muscle substrate such as RER, VO2, blood lactate levels, leg FFA turnover, and post-exercise muscle glycogen content were all unaffected by the ingestion of 2-5g of carnitine per day (anywhere from one week up to three months) [11]. Thus, the majority of relevant data looking at the oral ingestion and infusion of carnitine has failed to increase muscular levels leading to a lack of improved performance. Therefore, if we still buy into the hypothesis that fat metabolism can be increased via an increase in muscle levels of carnitine we are sadly left with the realization that this is just not possible. Or is it…

Although we just saw that the vast majority of research shows that carnitine supplementation (of up to 3 months) has very little impact – if any – on muscle levels of carnitine, it doesn’t leave out the fact there are some studies that do show an impact of oral ingestion and infusion of carnitine on muscle concentrations. First we will examine the infusion studies.

Indeed, it has been shown that oral ingestion of carnitine, alongside a rather large dose of carbohydrate (~80-94g), is able to effectively stimulate the “uptake” of carnitine as measured indirectly via plasma levels and urinary excretion [12, 13]. This is undoubtedly due to carbohydrates’ insulin stimulatory effect. Although 80-94g of carbohydrate is not unusual for a bodybuilder or weightlifter to consume in one sitting in the offseason or even in the earlier stages of dieting, the dosage may come into conflict during the later stages of prep (when carbs are being reduced) or for those who have lower CHO requirements by default (like the average American). Therefore, some practical limitations may come into play, especially when it means eating relatively high amounts of carbohydrate in order to gain what may be a trivial fat-burning effect from carnitine. What’s more is that although muscle levels of carnitine were indirectly seen to increase, there was absolutely no measure of improved body composition during the studies. However, what they did see was a reduction in glycogen breakdown at low intensity exercise (50% VO2 max), but this was effectively eliminated at intensities around 80% VO2 max. Either way, this does not reveal any convincing evidence that carnitine is a potent fat-burner or ergogenic aid even though major shifts in fuel metabolism can be seen; essentially showing a greater reliance on FFAs as a fuel source. These findings, nevertheless, are limited to conjectures about fat-loss in the long-term and are confounded by methodological issues that do not apply to the normal bodybuilder/fitness population or the endurance athlete – or anyone for that matter.

Although it may be physically possible to increase muscle levels of carnitine using relatively large amounts of carbohydrate repeatedly throughout the day, the fact still remains that there is limited convincing data that shows that carnitine is a potent fat-burner or ergogenic aid. Furthermore, when practical limitations come into play, the usefulness of carnitine as a fat-burner is undoubtedly overshadowed by the well-known effects of a solid caloric deficit in combination with increased physical activity (usually in the form of cardio). I should also note that carnitine has been implicated in aiding recovery from resistance exercise in both young and middle-aged populations [14-16] as well as increasing androgen receptor (AR) synthesis and therefore increasing cellular uptake up testosterone following weight training. This potentially leads to the activation various muscle synthetic pathways [17]. However, despite the potential beneficial basis of carnitine supplementation for muscle recovery and hypertrophy there just isn’t enough convincing data that shows supplemental carnitine will do jack-diddly in terms of sizeable gains in muscle mass accretion. We just don’t have the long-term studies necessary to make that conclusion. Conversely, there is some convincing evidence that transient elevations in anabolic hormones (due to exercise) such as testosterone and growth hormone are not closely associated with increases in muscle mass [18-20]. Therefore, increasing AR synthesis and testosterone uptake may be trivial in the larger scope of things.

The bottom line is that the beneficial role of carnitine for either exercise (be it endurance or resistance) or fat burning in young, healthy populations (especially the athlete) are, at this stage, completely theoretical and, most likely, trivial at best.

This entry was posted in Reviews, Supplements. Bookmark the permalink.